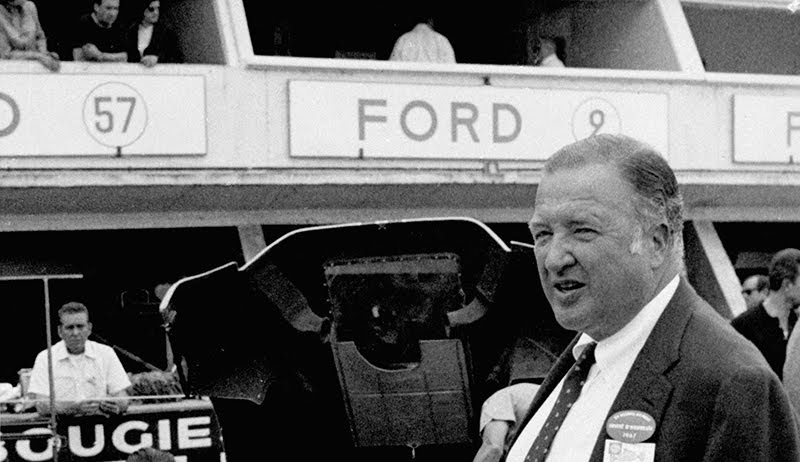 American industrialist Henry Ford II (1917-1987) turned his grandfather's faltering automobile company into the second largest industrial corporation in the world. In 1945, Ford II was only 28 when he became Ford Motor Co.'s President and CEO upon his grandfather’s retirement. The change in leadership marked a new era in company management. Ford II went on to establish a rapport with union leaders and to support collective bargaining. During his 34-year tenure, Ford II raised the company’s sales from $894.5 million to $43.5 billion by 1979. Under Ford II’s leadership, the company helped revolutionize the industry by introducing methods for large-scale manufacturing of cars using specialized techniques. In 1956, Ford II also led the company's successful IPO.

In addition to his role at Ford Motor Co., the executive served as an alternate delegate to the United Nations under President Dwight D. Eisenhower in 1953, and as chairman of the National Alliance for Businessmen (which sought jobs for the unemployed) under President Lyndon B. Johnson in 1968. The 1970s saw Ford II add the problems of pollution and environmental control to his earlier concerns for labor relations, business ethics, international trade, and civil rights. For his many contributions, Ford II received numerous awards and honors, including a U.S. Presidential Medal of Freedom, and an "Honorary Knight Commander of the Most Excellent Order of the British Empire" by Queen Elizabeth II.

In 1936, Ford II entered Yale University, where he showed more enthusiasm for activities outside the classroom. The young man began college as an engineering student (a courtesy nod in the direction of his expected future role with Ford Motor Co.) but quickly switched to sociology. As a Yalie, Ford II also served on the business staff of The Yale Record, the campus humor magazine, and was part of the Zeta Psi fraternity. Despite these efforts, however, Ford II left Yale without graduating in 1940. The university refused to grant him a degree after a receipt carelessly left attached to his senior thesis betrayed the fact that it had been ghostwritten for him. Ford II's time had not been misspent, though , as by the time he left school he had already been a director of Ford Motor Co. for two years.

Years after Ford II's passing, his influence on the Yale campus can still be felt. In 1998, his alma mater celebrated the creation of the "Henry Ford II Court," a courtyard at Yale's School of Management, which was made possible through a grant from the Ford Motor Company Fund in honor of the automobile tycoon. For many years the Ford Motor Company Fund has been a major donor to Yale, contributing more than $1.2 million. Notably, the University finally took care of Ford II's lack of academic credentials. In 1972, Yale awarded Ford II an honorary Doctor of Law degree for his commitment to minority employment and for creating minority dealer and supplier development programs at his history-making company.